Administration is probably the second oldest profession in the world. Every ancient civilisation would have needed it and the administrators, no doubt, needed some sort of office (including the obligatory uncomfortable desk chair). The first purpose-built office building in the UK is still in use today. It’s believed to be the iconic Old Admiralty Office that stands on the banks of the River Thames in London. Built in 1726, it’s purpose was to accommodate and process the significant amount of paperwork generated by the Royal Navy.

East India House, also in London, closely follows The Old Admiralty Office. Embracing the benefits of centralised administration, office buildings began appearing all over the capital and beyond. As you would expect from 18th century Britain, the office class system was immediate. A governmental report on office layout recommended separate rooms for more “intellectual work”. Whilst for the “more mechanical work”, a number of clerks would be housed in the same room (under the proper superintendence, naturally).

Offices of the early twentieth century

Offices were originally part of factory buildings. And they were run like factories too. Many followed the principles created by the mechanical engineer, Frank Taylor. “Taylorism” sort to maximise efficiency by filling vast open-plan offices with rows upon rows of office workers. Needless to say, his methodology lacked the human touch and those offices probably more closely resembled factory-farming than they do a modern day office.

As technology allowed skyscrapers to grow in size in the 1930s, so did the amount of office space. And this allowed for more congenial working conditions. The open plan office began to include private offices for meetings and managers plus communal spaces like kitchens and canteens. Lifts allowed buildings to go higher while electric lighting and air conditioning helped improve the worker’s experience.

Birth of the modern office

Thanks to the Great Depression and a world war, it wasn’t until the 1960s that office design really starts to embrace human interaction, however. Burolandschaft, a concept from Germany, means “office landscape”. It first grew in popularity across northern Europe before spreading to the rest of the world. Layouts were less regimented and the first significant use of office plants was seen. It’s easy to understand how modern office layout design attributes itself to Burolandschaft.

A greater variety of working spaces including communal areas, meeting rooms plus more private individual desks lead the sociable and gregarious Burolandschaft designs to morph into the Action Office(!). Women also began to enter the workforce in greater number during this period. The creation of the desk ‘modesty panel’ quickly followed. 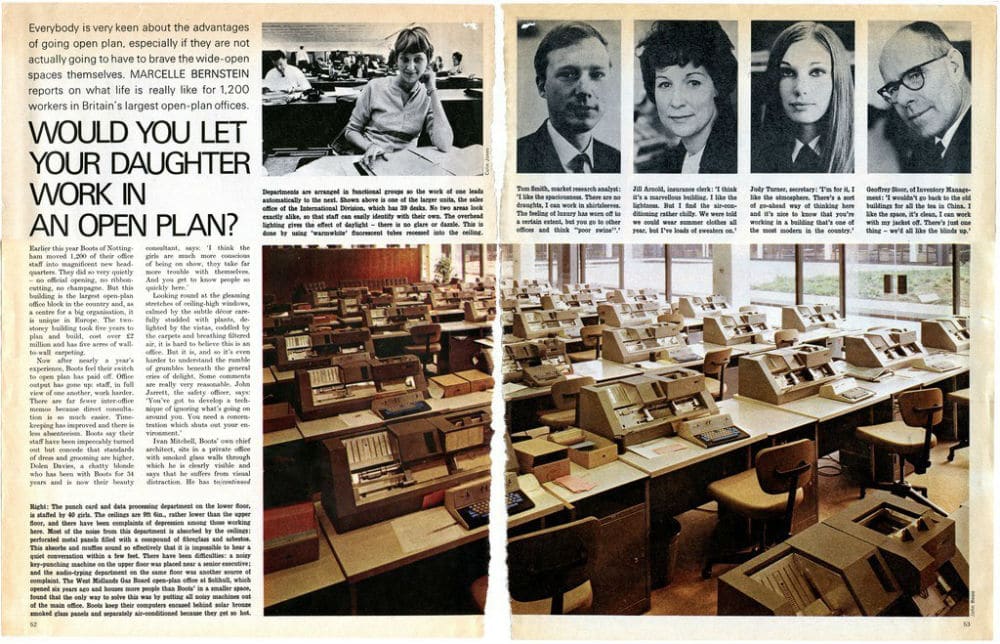 So much sexism, so little time

However, the addition of autonomous and private working spaces of the Action Office lead the history of office design down a dark alley. As modular office furniture too evolved to meet office trends, the infamous office cubicle was born, nay, spawned. Cubicle farms began to more closely resemble Taylorism than Burolandschaft as the profit-over-people mentality of the 1980s peaked.

Where is office design today?

Despite an uninteresting office design period known as the 1990s, the decade did witness the dawn of the digital revolution. It was this paradigm shift that allowed employees to finally emerge from their cubicle cocoons and see sunlight for the first time in almost two decades. This is perhaps the biggest leap forward in the history of office design.

And technology continues to play the most significant role in office layout evolution. Whilst the concept of a private cubicle desk still exists today, workers are no longer confined to them because of mobile computing. The Cloud, WiFi and decent batteries allow people to work wherever they choose.

Resimmercial design – when working from home meets open plan office – encourages comfortable and flexible working spaces that feel more like home than the office. Choices of where to work (or where not to work when on a break) can assist a person’s schedule or simply support how they are feeling that day. Collaborate and creative spaces allow teams to work together or hold meetings and presentations. Whilst secluded nooks and pods cater for more quietly productive working.

The future of office design

It’s hard to predict the future but we can learn from the past. Technology has shaped our offices just as much as how an individual’s value within society has. It is likely that greater respect for people’s health and family life will see a flexible working revolution. In a global society with growing access to virtual and augmented realities and 3D printing, these technologies will no doubt also shape how and when we work. Or the AI overlords will rise up and we’ll back in the cubicle farms where we belong. 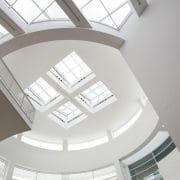 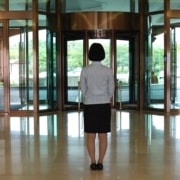 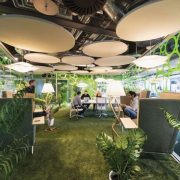 Biophilic Design – what is it? 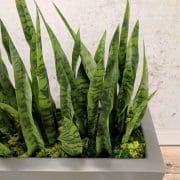 Our most popular artificial plants and trees from Floresy 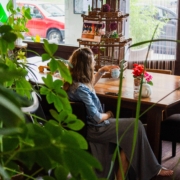 6 Ways to Create an Eco-Friendly Restaurant 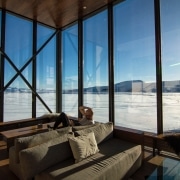 How to prepare your hotel for winter

Want to join the discussion?
Feel free to contribute!